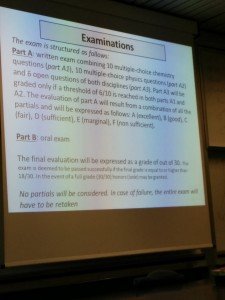 We learned today a bit about the structure of our exams, here at the International Medical School at the University of Milan. What applies here does not necessarily apply to other English-language MD programs in Italy.

Essentially, our year is divided into two semesters. One lasts from October to January, and the other from March to July. (In previous years, the first semester lasted from September to January, but because of the late entry test date this year, the program started in October instead.) After each semester, there is a testing period of about a month’s duration.

Our exams, on the three different units (“Cells, Molecules, and Genes”, “Fundmentals of Basic Sciences (FBS)”, and “Human Body”), are spaced out across this monthlong period. The intention is to prevent students from having multiple exams at about the same time. You are allowed to choose one of two exam dates for each subject. For FBS, your have first a written exam, with three parts, A, B, and C. A and B are multiple choice. If we pass parts A and B (get 6/10 or higher), then part C, which requires a free response, is also graded. If you pass this full written test — that is, score 18/30 or higher — then, you are permitted to take an oral examination. Meanwhile, there is a diagnostic written exam in mid-January. If you pass this exam, it can replace the February written tests.

If you fail exams, you can retake them over and over, until you pass them. Of course, this requires waiting for later exam periods, and potentially retaking courses. You can fail some of your first year exams and still proceed to the second year of the course, but you cannot go from second (pre-clinical) to third (clinical) without passing all your exams up until that point.

The intention behind this exam system seems to be to ensure that every student who graduates from these programs knows the material very well. The system may also reflect the requirements of ministerial or European Union-level decree. This is different than in the United States, where many medical schools (including that of my alma mater, Stanford) are pass-fail, or a hybrid, of two years of pass-fail, and then two years of A-F letter grades.