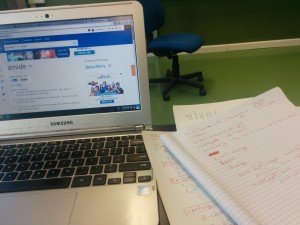 taking notes on language during class

One interesting feature of the international medical schools in Italy is that you have professors teaching, and students learning, in for what most of them is a second language: English. What is this like — at least here at the IMS at the University of Milan?

None of our professors, so far, are native English speakers. Probably about 25% of the students are. The level of proficiency among non-native speakers varies, from high intermediate to advanced fluency.

Classroom time, therefore, involves two different intellectual challenges. The first is the understanding of the scientific material being learned. The second is the translation of these ideas into a lingua franca that permits everyone to understand them. In the classroom, the teacher and students go back and forth, checking to make sure that each has understood the other.

During lectures, therefore, students tend to be less passive, and professors tend less to just talk on their own, than in other university science classes I have experienced, whether in the US (in English), or France (French). If IMS students don’t understand something, they often raise their hand and tell the teacher, who will even sometimes consult with one of the Canadians, Americans, or British in the room, to find a different way of expressing the idea. That way, everybody gets the concept, and everyone is joined into the discussion. If you can translate something, you probably understand it.

What effect does it have on the pace of science learning, that most of us are not speaking in our mother tongue? Sometimes it slows things down, but more often, it speeds them up. That is because in the English-speaking world, scientists tend to rely on tropes to explain fundamental scientific concepts. They lean on verbal explanations handed down to them from their teachers, and who got them from their teachers, and so on. For example, I have lost count of how many English-speaking professors — at places ranging from my public high school to Ivy-League Columbia — have referred to mitochondria as the “energy factory” of the cell. This is, perhaps, a simple and easy way of putting it, but it’s not quite accurate. Mitochondria perform many other functions, including signalling and synthesis reactions.

Although Italians also very occasionally call mitochondria the “fabbriche di energia”, that is not how our professors here at IMS described them. Rather, our teachers went through the organelle’s tasks in detail, forcing us to reconceive the mitochondria’s role in life systems. Mixing so many cultural and linguistic backgrounds yields creative new insights about established biomedical sciences.