It is nearly impossible to master the discipline of medicine without textbooks. At the IMS at the University of Milan, we have considerable choice about the textbooks we use, and a number of different ways of acquiring them.

Our semesters are divided into modules. For the first semester of the first year, these modules are 1) histology, embryology, and anatomy, 2) biology, and 3) biochemistry and biophysics. For each module, there is a suggested list of textbooks. None of them is required. However, it is probably safe to say that it would be very hard to comprehend the material — and pass the exams — without using at least some of these textbooks.

In addition to the recommended textbooks, there are many more books, web sites, flash card sets, and other resources which are potentially useful to students. Each seems to have her or his personal preferences. I, for example, tend to study well from big reference works, which I carry around and consult all the time. For anatomy, this might be Gray’s Anatomy for Students, or for biology, the Molecular Biology of the Cell. Other students prefer dynamic, online learning, like the excellent Blue Histology from the University of Western Australia. Many students study best with standardized exam prep materials, like First Aid USMLE. 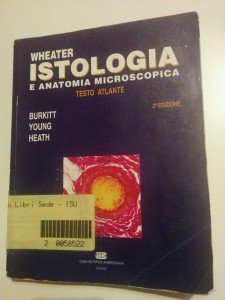 Which language to read a textbook in, is another question faced by IMS students in a unique way. The school’s suggested texts are in English. However, we are all expected to be able to practice medicine in Italian, so it may be a smart move to get a dual copy in Italian. Furthermore, the first language of nearly the majority of our students is neither Italian nor English, so they sometimes find it helpful to pick up books in their mother tongue. Many of the textbooks have multiple translations. Gray’s Anatomy, for example, is available in more than a dozen languages.

There are a number of ways that IMS Milan students get textbooks. First of all, Milan has a number of libraries where textbooks are available for free. The University itself has an enormous system, totalling 70 libraries around the city. Also, an organization called CIDiS runs its own separate library system, Prestito Libri, for students of the three public universities in Milan (the “Statale” (University of Milan), Bicocca, and Insubriae). The Prestiti Libri have the goal of simply loaning out textbooks for periods of, for example, 90 days, and are well-stocked in the medical school classics, in English as well as in Italian. The IMS secretary’s office, meanwhile, has said it ordered a few sets of textbooks specifically for the students, which are going to be kept at the classroom building, LITA, in Segrate. Of course, you cannot (or rather, should not) write in library books, so if you wish to take notes in your textbooks, you have other options.

Right across from the main University complex in the city center, as well as in two locations in the Città Studi (the engineering campus which takes up about 10 square blocks in the east of the city), and in Bicocca (site of one of the Italian-language medical schools), is the Libreria Cortina. It is a maze of a medical and scientific bookstore which comprehensively covers our curricular material, in both Italian and English. I recently picked up Gray’s Anatomy for Students there, in English, for 54 euros. Of course, you can also order new books online, via Amazon or a similar retailer.

Furthermore, many of the Milan English medical upper-year students sell (or, generously, give) their textbooks to the lower-year students. There is even a website dedicated to this, MiMed Books. (MiMed was the name of the IMS until two years ago, when it was still a joint venture of the University of Milan and Humanitas Hospital. Humanitas has since set up its own, private, English-language medical school. Many of the former MiMed faculty still teach at IMS, University of Milan.)

Finally, students also find many ways of acquiring online versions of textbooks. They either study directly from, and take notes on, the screen, print the textbooks at home, or have them printed at a professional printing shop, a tipografia, of which there are many scattered throughout the city. Often, this is done illegally. However, I will abstain from judging whether or not it is ethical, as there is considerable controversy about whether the sometimes prohibitively expensive prices of new textbooks are fair to students, or good, for that matter, for medical education as a whole.