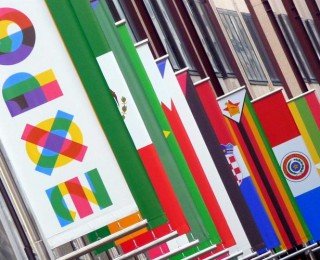 I have spoken individually with (almost) all 46 of my amazing classmates in the first year at the IMS Milan, and asked them what country, or countries, they represent. There are  22 countries in total.

I have written before that one thing that makes the IMS Milan special is that it is one of the most internationally diverse — if not the most diverse — medical schools in the world. That is one of the main reasons that I chose to come here. The IMS Milan is not just about learning medicine, but also celebrating a profound goodwill across cultures and languages.

P.S. The featured image of this post, above, is of flags of the world, as displayed for the Milan 2015 Expo.