On the first day of class, our histology professor put up a slide with a quote by 19th century Italian biologist Angelo Ruffini. “Shape is the expression of function,” it said. At the time, I barely paid attention to these words. Now, as I prepare for our exam in these final two weeks, I realize that Ruffini’s quote is key to learning histology — or Japanese characters.

Let us begin with a quick description of what we are going to have to do on the histology exam. We will be given a slide under a microscope, say, like this one, except without the labels (this is from Wikipedia)… 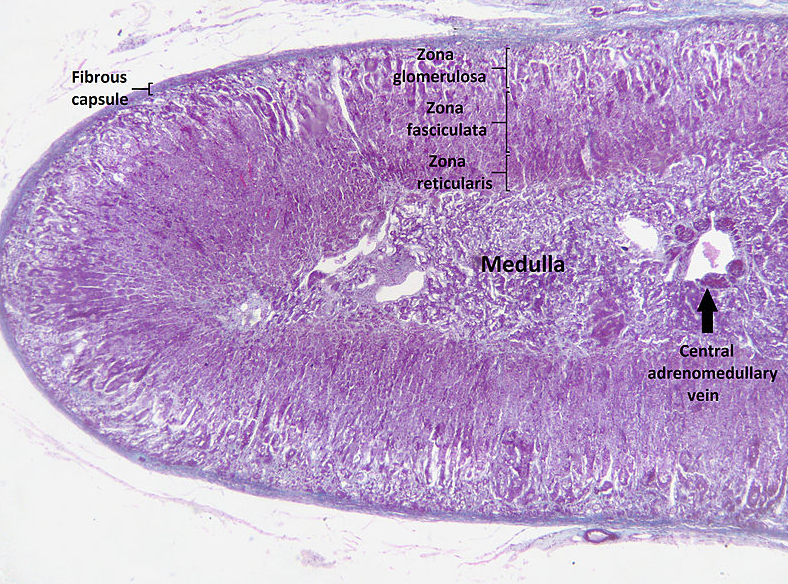 …and we will be required to describe what we see. Now, I can tell you immediately that it is an adrenal gland. It has certain distinguishing features, like the areas called the zonae glomerulosa, fasciculata, and reticularis. When I first started the course, in October, my strategy was basically to learn everything based on pictures and labels. In other words, I would look at this slide, say that I see the three zonae, and know, all right, that’s an adrenal gland.

That strategy worked for the first few weeks of the course. The problem is that after a while, images start to look very similar. It gets harder and harder to distinguish between types of structures. Just one of our three recommended textbooks has about 1000 different images in it.

The problem of how to keep recognizing all these features reminds me of when I was living in Japan, and trying to learn Japanese characters, the kanji. There are about 2000 of them, each with a different meaning, and usually with several pronunciations. As you keep on adding kanji to your study list, they get more and more jumbled together in your mind. Take, for example, the two kanji 猫 — which means cat — and 描 — which means draw. If I showed you either one of those independently and told you their meaning, the next morning you would probably recognize it immediately. However, side-to-side, it takes a lot more cognitive effort to figure out that the cat character has a different angle to its lines on the left side than the draw character. Now, try to multiply that effort, for two characters, by 1000 (not that effort, in this sense, is really very quanifiable) and you begin to see how much you have to learn to distinguish. Here are all 2000 kanji: 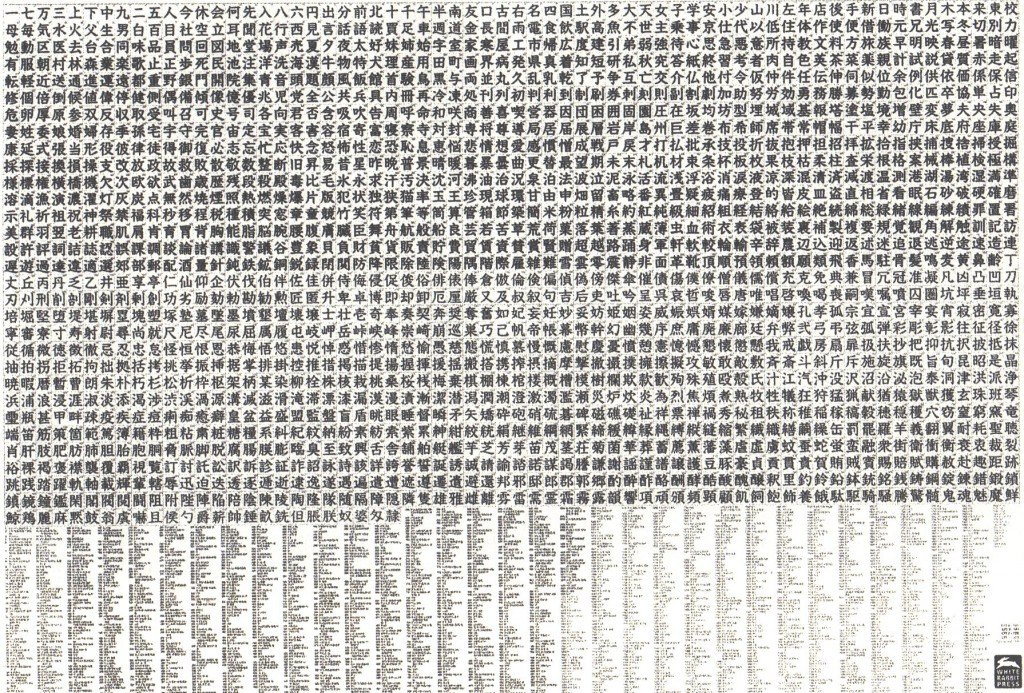 Yikes! I would like to add here, as a sidenote, that I have heard it remarked about both medicine and Japanese, that part of the reason that people study these subjects is because of the appeal of what’s hard. I know that I am a easily drawn in by this appeal, perhaps not always to my benefit.

Amongst Japanese teachers, there is considerable variety of opinion about the best way to teach the kanji to adults. Some think that brute force — repeated writing of the characters over and over again — is the way to go. Japanese schoolchildren do this, learning the kanji over the course of eight years. Now, I am not an expert in Japanese pedagogy and cannot render a final judgment on the question. However, I do know that in medical school, you simply do not have time to learn histology by brute force. I cannot drill myself over and over again on the thousands of textbook pictures in time for the exam.

Other kanji instructors, however, have developed systems for adults to help them learn the characters more quickly. One of those systems was popularized by James Heisig, a philosopher of religion living in Japan, who published a best-selling series called Remembering the Kanji. Heisig’s basic approach was to point out that there are only a certain, limited number of structures inside of kanji; these are known in Japanese as radicals. Each radical has its own traditional meaning. Our characters cat 猫, and draw 描, both have the same radicals on the right side. You can see ⺾, which means grass, and ⽥, which means rice paddy. On the left, you see two different radicals. ⺘ means hand, while ⺨ means beast. Heisig himself actually did not assign the radicals their traditional meanings (because, among other reasons, more than one radical has the same meaning), proffering new ones, but his point was: for each character, use the radicals try to tell a story that explains its meaning. In other words, to remember the kanji, relate their structure to their semantic function. So for the cat character 猫 you might imagine a beastly cat prowling grass and rice paddies, while for the draw character 描, you might imagine the hand of a painter, seated on the grass next to a rice paddy, the warm Japanese spring wind blowing across his fingers. After conjuring these images, Heisig claimed, you will probably never fail to recognize these characters again.

We can apply Heisig’s method to learning histology. Glance again at the adrenal gland slide above. Now, I will put another slide in front of you. Again, ignore the labelling. (It comes from Wikipedia.) 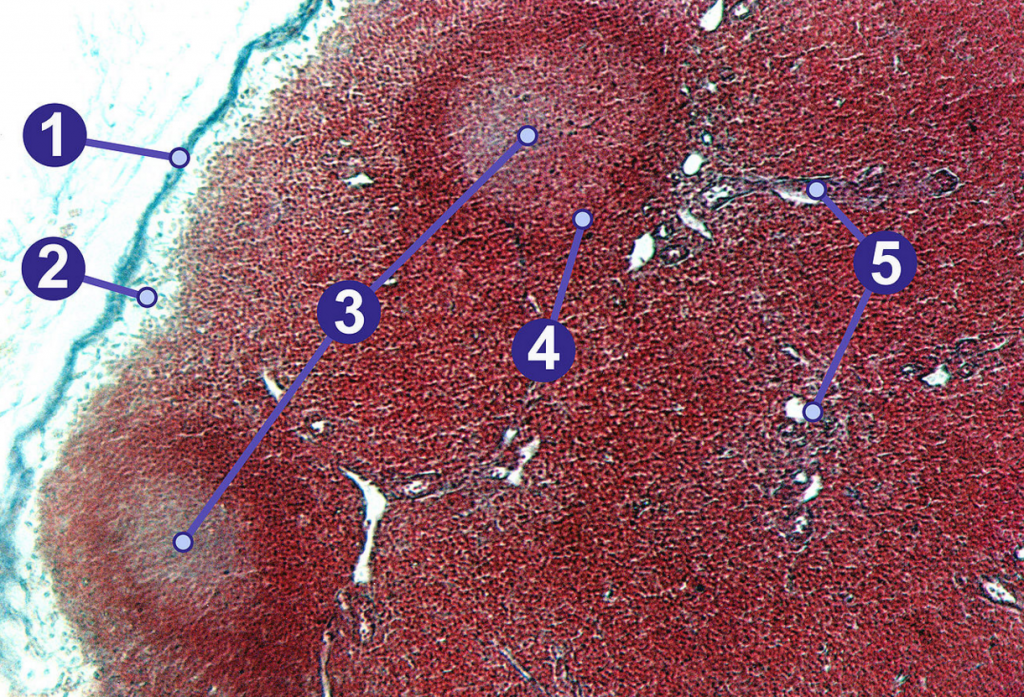 How would you know that what you are looking at is now a lymph node, and not just a close up of an adrenal gland? After all, you see darker-stained and lighter stained areas, which, if you did not know better, could also be zonae glomerulosa, fasciculata, and reticularis. There also seems to be a capsule on the outside of this organ. In order to figure out the differences between the two, you could stick lots and lots of pictures of adrenal glands and lymph nodes in front of you, until you could distinguish their features by brute force. Indeed, that is more or less what I did in the first few weeks of histology. 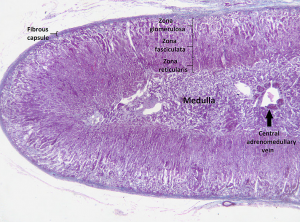 Now, however, over days three and four of my exam prep, as I review all the material from the course, I am realizing that learning these images rapidly requires a kind of breaking down each image into components, and building meaning out of them, in a similar way that Heisig created stories out of kanji. So, let us go back to the adrenal gland. I will put a small version of the picture here again, just so you do not have to keep scrolling up.

We can actually begin with the word itself, adrenal. If you break it down into its components, you get ad-renal: ad — meaning at, and renal, the adjectival form of renes, meaning kidney. Ha! It actually took me months to notice this. I kept on forgetting where in the body the adrenal gland was, until I realized that the name was telling me right there: it is just on top of the kidney. Furthermore, there is a reason it is there. The adrenal gland produces a type of steroid hormone called a mineralcorticoid, which the kidney uses to control water and electrolyte concentrations in the urine. Mineralcorticoid is made in the zona glomerulosa, which, if you look carefully, kind of resembles little balls of thread. And, surprise surprise, if you look up the etymology of glomerulosa, you will learn that it is Latin for “little balls of thread”. Mineralcorticoid has a certain chemical structure which requires cells that secrete it to bunch together around blood capillaries in a threadball-like fashion. So that is why that part of the adrenal gland looks the way it does.

You can go through this kind of logic with the other zonae, and the capsule, and so forth. There are, in fact, only a limited amount of features like this that you end up seeing in histology slides — that is, certain shapes and appearances of cells, certain kinds of tubes and ducts, and so forth. If you create a taxonomy, you end up being able to tell a a story about each organ’s function, the same way that kanji radicals tell stories about the character’s meaning.

Hence, we can go back to the picture of the lymph node. Those lighter and darker areas — none of them look like little balls of thread. So now we know we are not in the adrenal gland. Furthermore, the capsule around the edge of the organ looks different. There is a white area, labelled 2, underneath it. Why is it white? Because it is empty, of course. That is the subcapsular sinus, which carries lymph around the node while being filtered there. No other organ processes lymph holistically like a lymph node, and so that subcapuslar sinus is an absolute marker of the lymph node. Shape: check. Function: check. Ruffini was saying something important after all.

If I had not, many years ago (long before I ever expected to study medicine) passionately racked my brain trying to figure out how to learn Japanese characters, it would probably not be as easy now to master histology. In the last couple of days, as I try to integrate my emotions into my studies before this exam, I am realizing that parts of my personal past that seem, on the surface, unrelated to medicine, actually profoundly inform the way my brain processes the subject matter.