An Art Exhibition on Migration and Humanitarian Aid 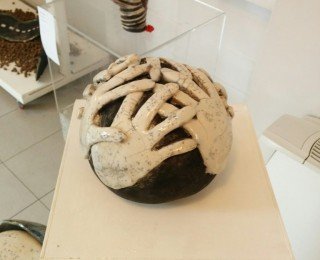 A few weeks ago, we had the chance to visit an emotionally-moving art exhibition, on refugees, human migration, and displacement, co-sponsored by Emergency, an organization, based near IMS-Milan, which is similar to Doctors Without Borders. Here is what we saw. 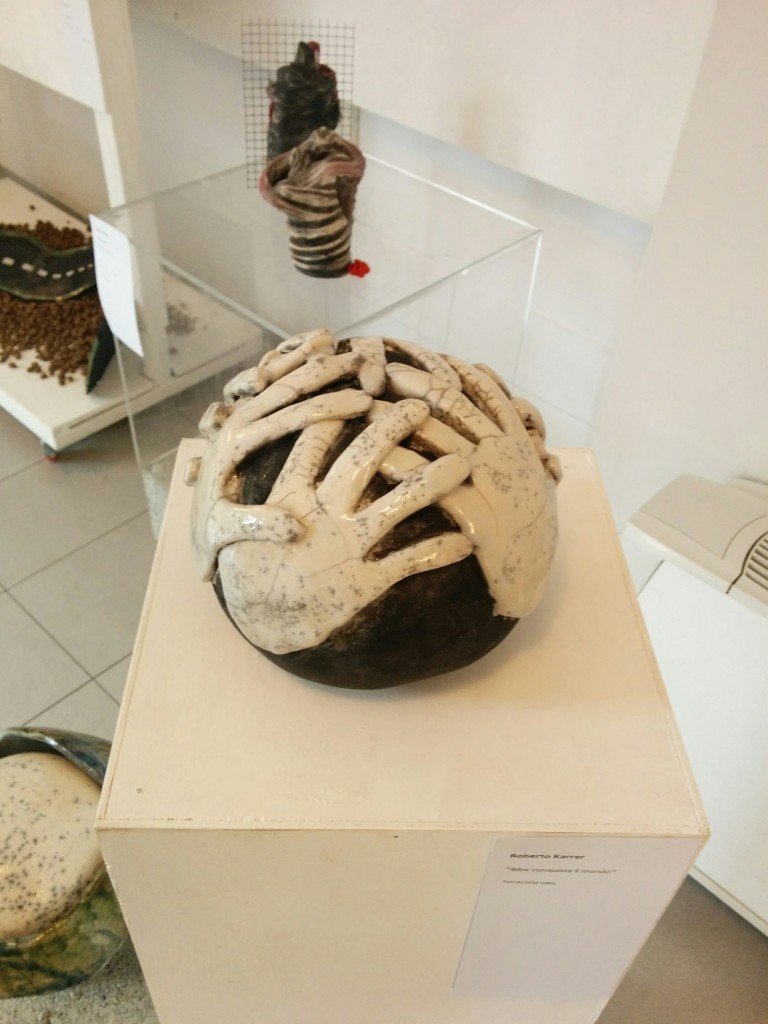 One of the first pieces to catch my eye was this ceramic of hands touching each other around a sphere. It is by Roberto Karrer and entitled Bibe conquista il mondo. I am not positive of the translation of the title, because the only meaning of bibe that I know of in Italian is “baby bottle”. Conquista il mondo means “conquers the world”. There is something humane and universal about imagining hands stretching across the planet to hold each other.

This exhibition was held in a gallery in Milan’s Navigli district, which is a sort of bohemian artistic neighborhood, built around canals designed by Leonardo da Vinci. Emergency does medicine, surgery, and rehabilitation in some of the world’s most under-served areas, such as Afghanistan, Iraq, and the Central African Republic. Since its inception in the 1990s, Emergency has helped more than seven million people. It is based in Milan and was founded by war surgeon Gino Strada, a graduate of the University of Milan medical faculty — the same branch of the university that runs our International Medical School. Proceeds from the art exhibition went to Emergency, who had representatives on hand and spoke to us students about working for the organization, which is something I would very, very much like to do. Emergency has offices in the US, UK, Japan, Belgium, Switzerland, and Hong Kong, and its headquarters are just a 10-minute bike ride from IMS-Milan, in a neighborhood where many students live. Among the people that Emergency tends to are the many migrants arriving precariously on boats to Italy’s shores.

Another piece of Karrer’s art that immediately grabbed my attention — because it so clearly addressed the theme of migration — was Partenza, which means “Departure”. Migrants and refugees do not always know where their road will lead, whether through rocks or sea or sky. 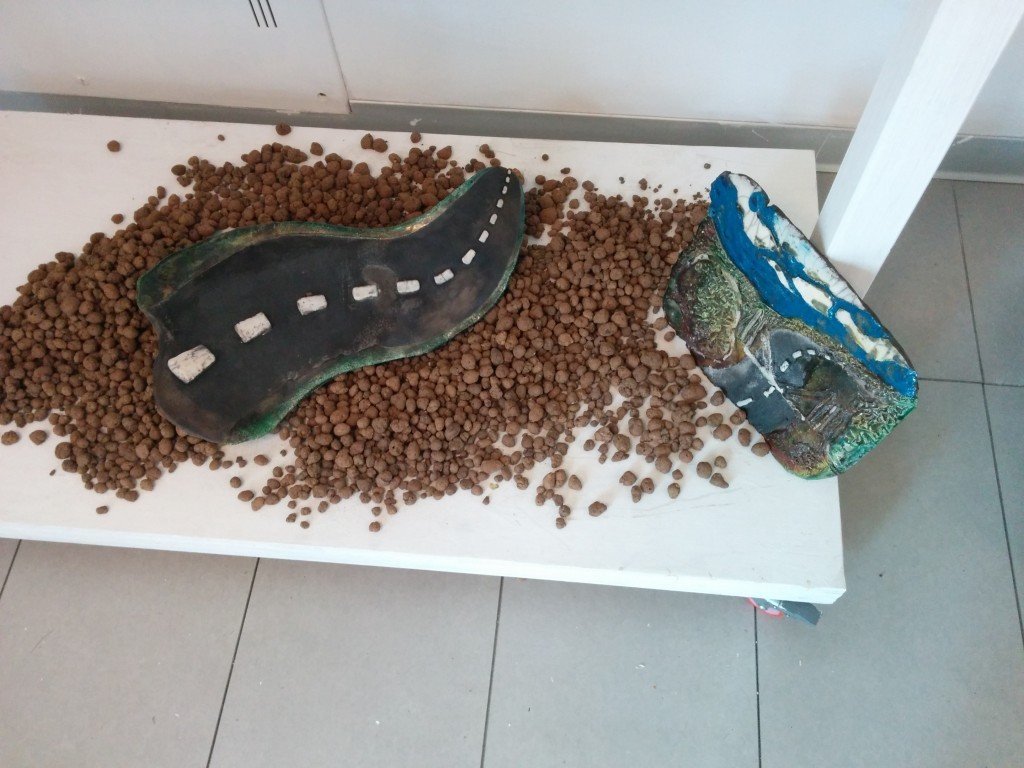 Gli smarriti — “The lost” — by Marisa Vanetti, is “dedicated to all human beings lost during migration. Women, men, mothers, children and fathers … maybe scientists, artists, philosophers.” We spectators at the exhibition were allowed to move the statues around the circle, which, to me, symbolized the inner world of opportunity which some people are privileged to have, and an outer world of those who are disenfranchised. 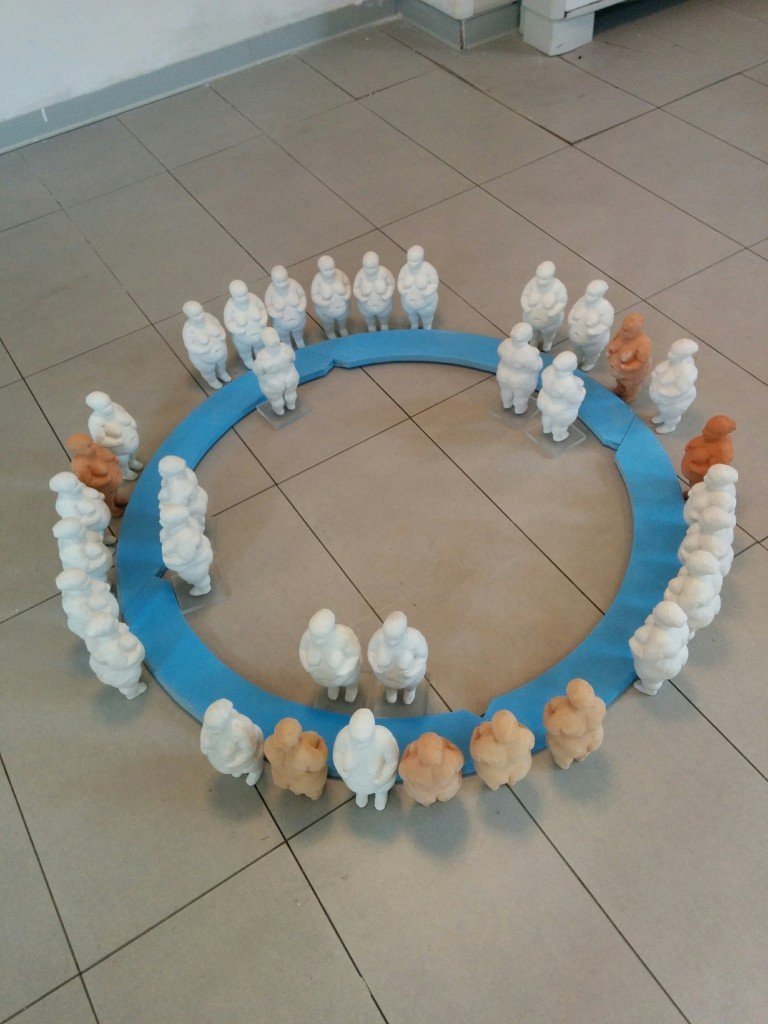 Here, in another piece arranged in a circle, the empty shoes represent those of migrants. Spectators were allowed to take the center chair, without the shoes, to try to imagine what it means to be in those of refugees and displaced persons. I did not catch the artist’s name of this piece, nor its title. 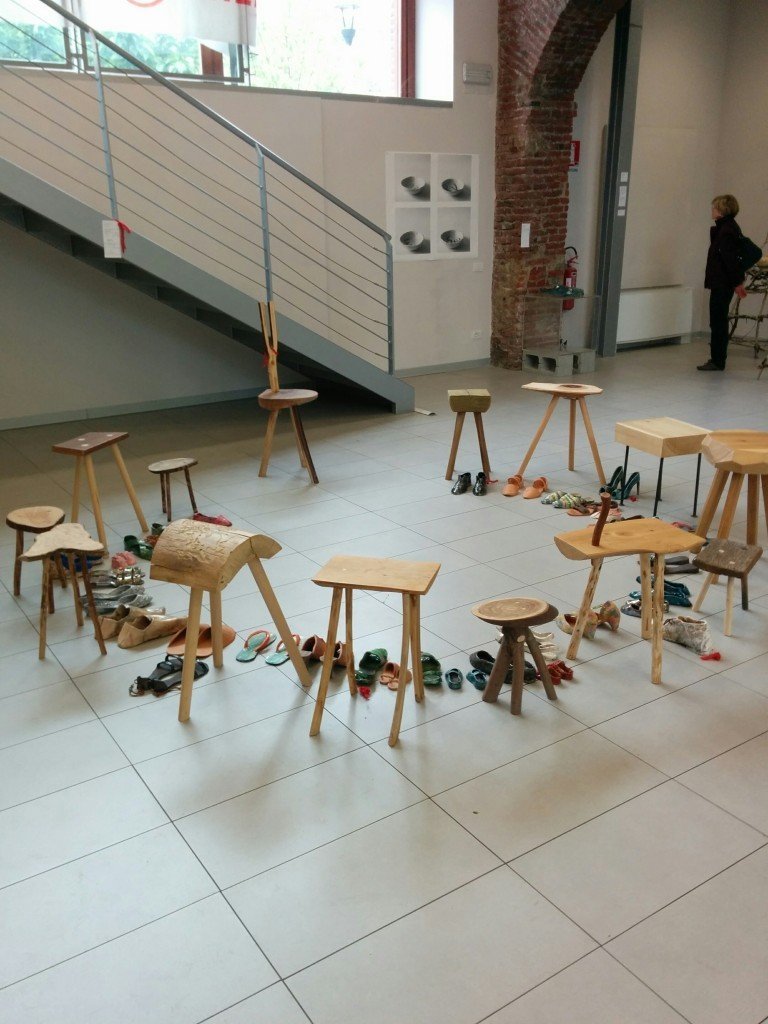 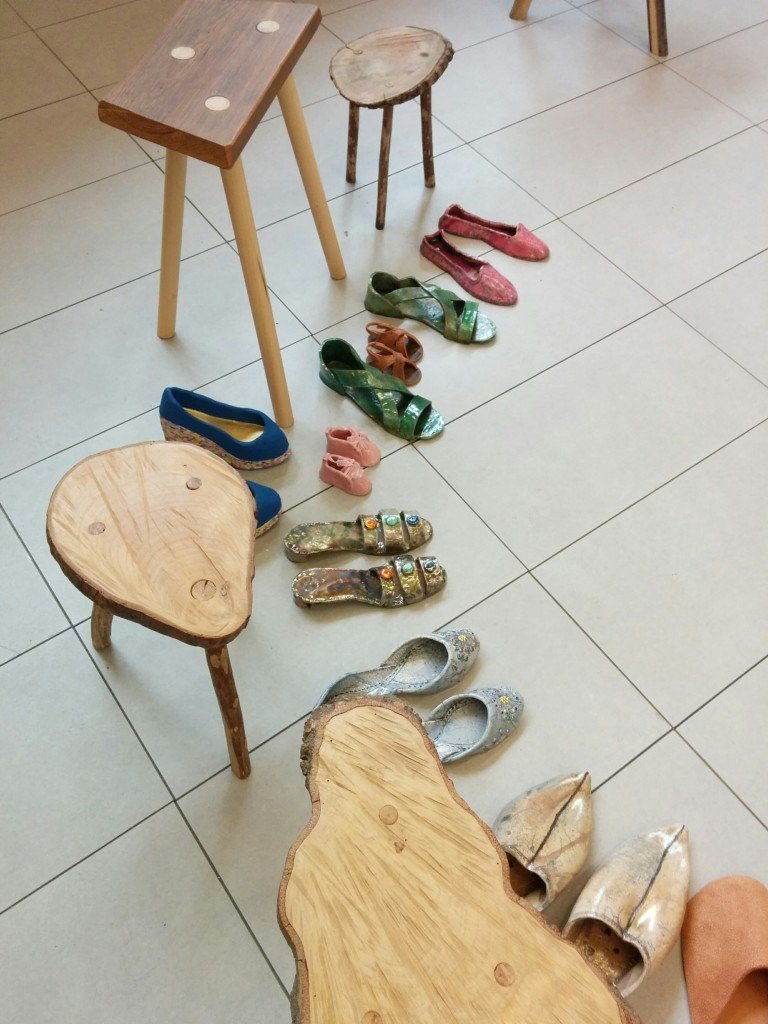 A heart-wrenching Kerrer piece, Untitled. Two loved ones (?) try to embrace through a border fence. 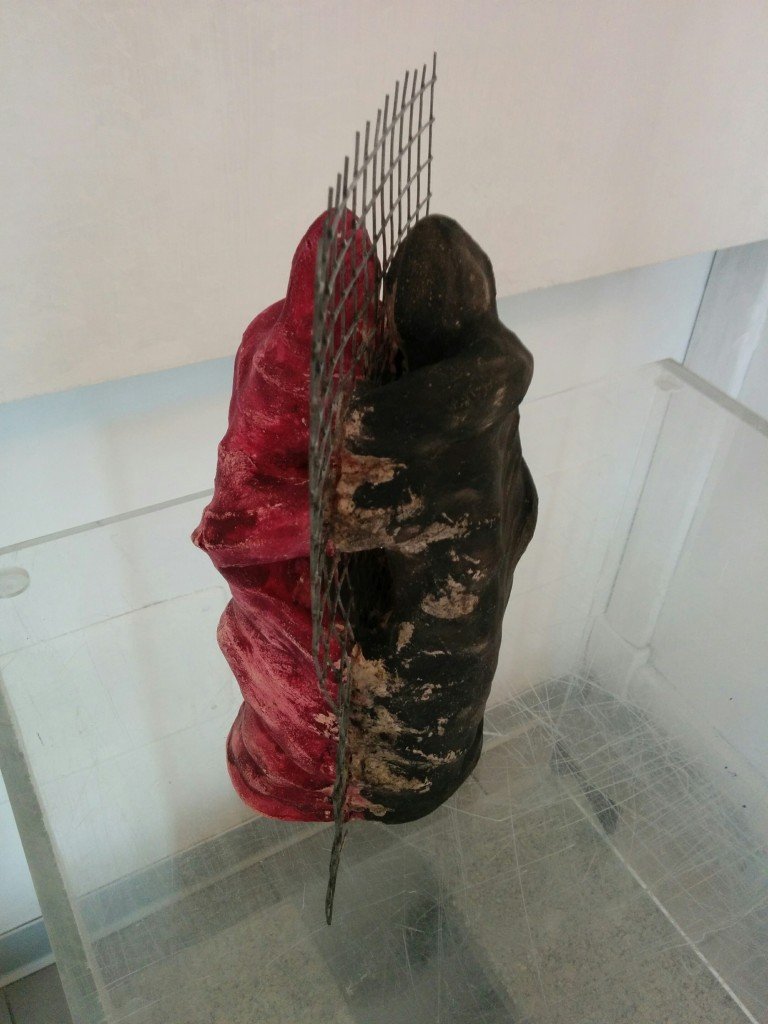 In transit, by Kerrer and Silvia Zocchetti, representing the voyage from the Earth, up to the sky, “liberty, breathing without limits”. 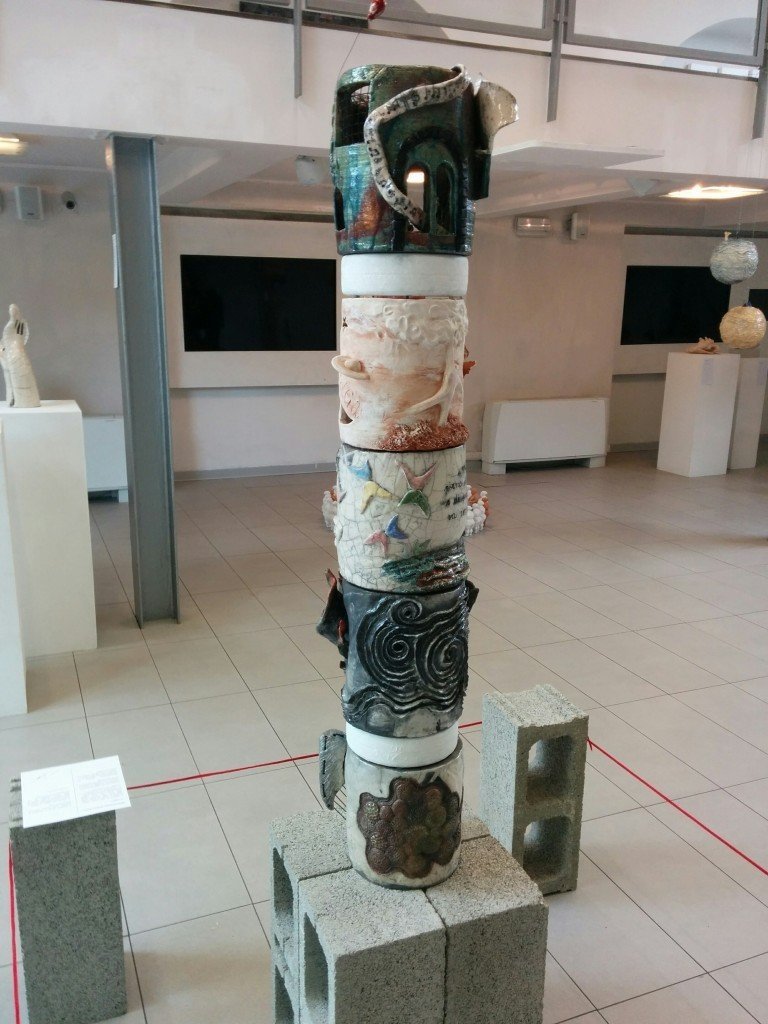 I can’t read the whole inscription, but it says something about “my son… and the butterflies go across the sea”. 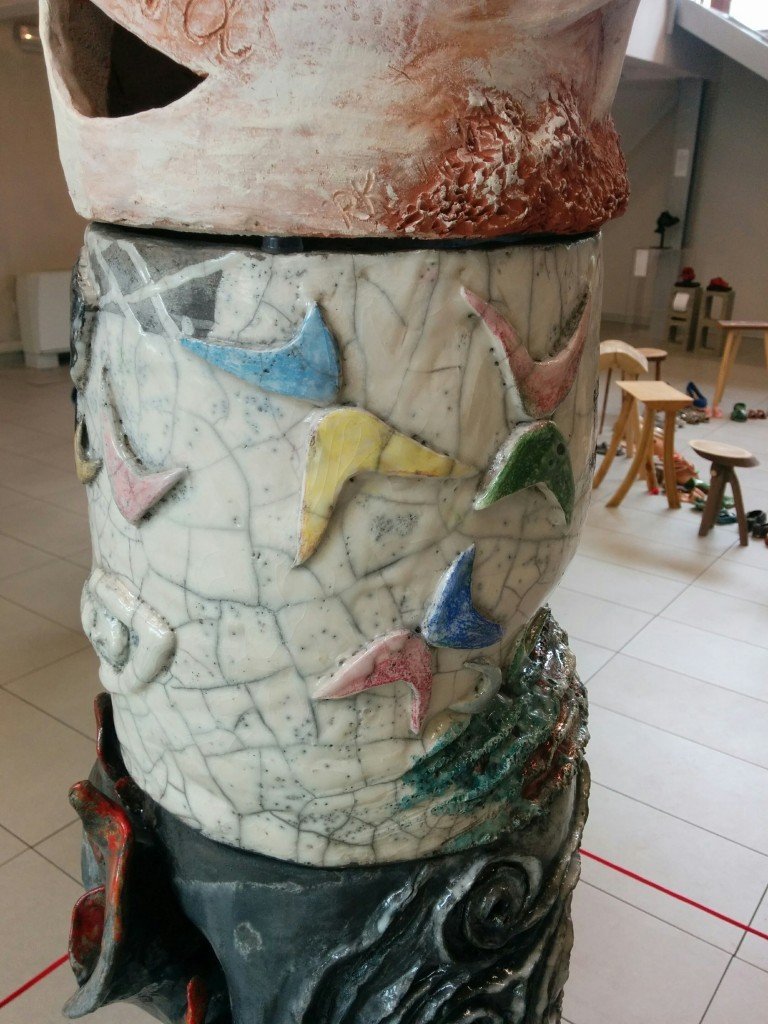 Children play with a balloon… 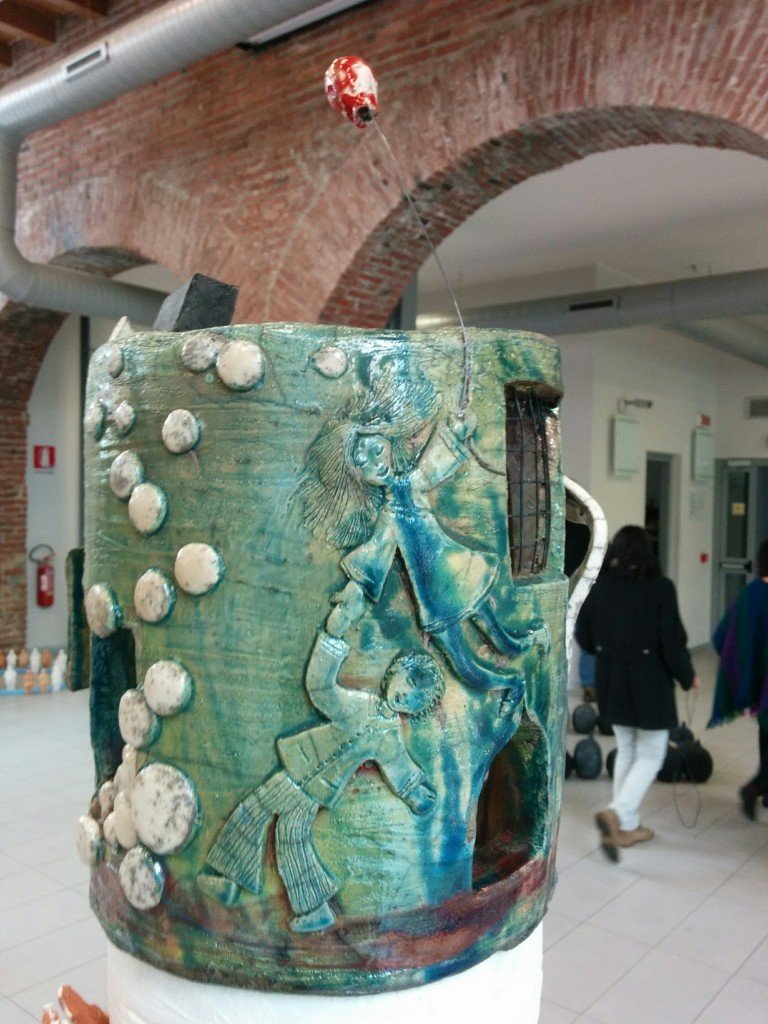 …and something (smoke?) rises from a window. 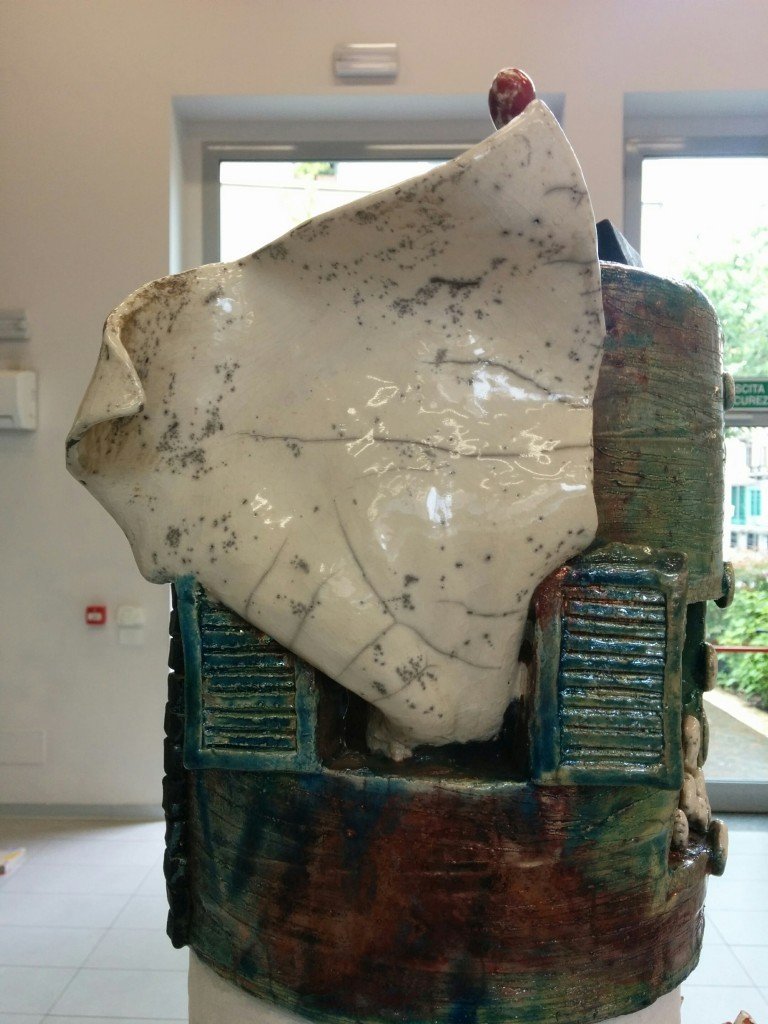 Boats were a common theme at the exhibition. This one reminds me of an ark; it is almost like a boat with a city inside. The artist is Gabriella Ripeli, and the piece is called IPAZIA – in English, HYPATIA, the name of the Greek mathematician and philosopher whom, the story goes, was murdered by religious extremists (in this case, Christians). 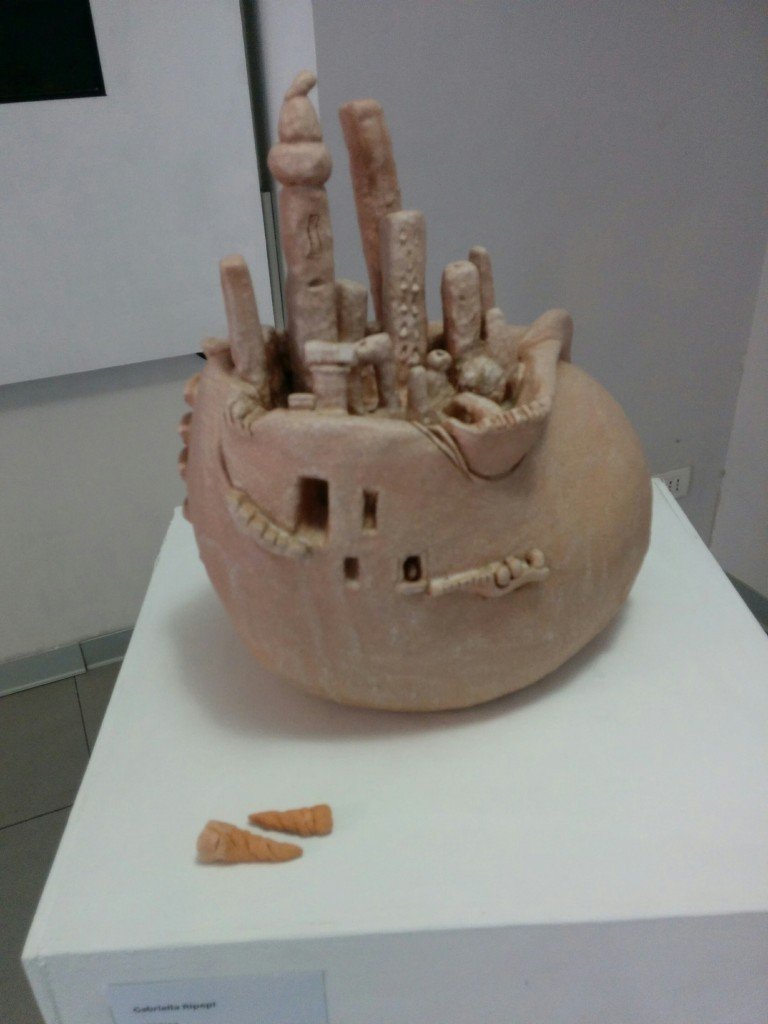 Vite in viaggio, also by Zocchetti. A play on words, vite means both “lives” and “vine”, like a grapevine. Here, the pod looks like a boat. “The seeds, promise of life, wait, protected, for time to germinate. Men, women, children, torn from their earth, head out on a journey without protection, waiting for landing, and new possibilities for living.” 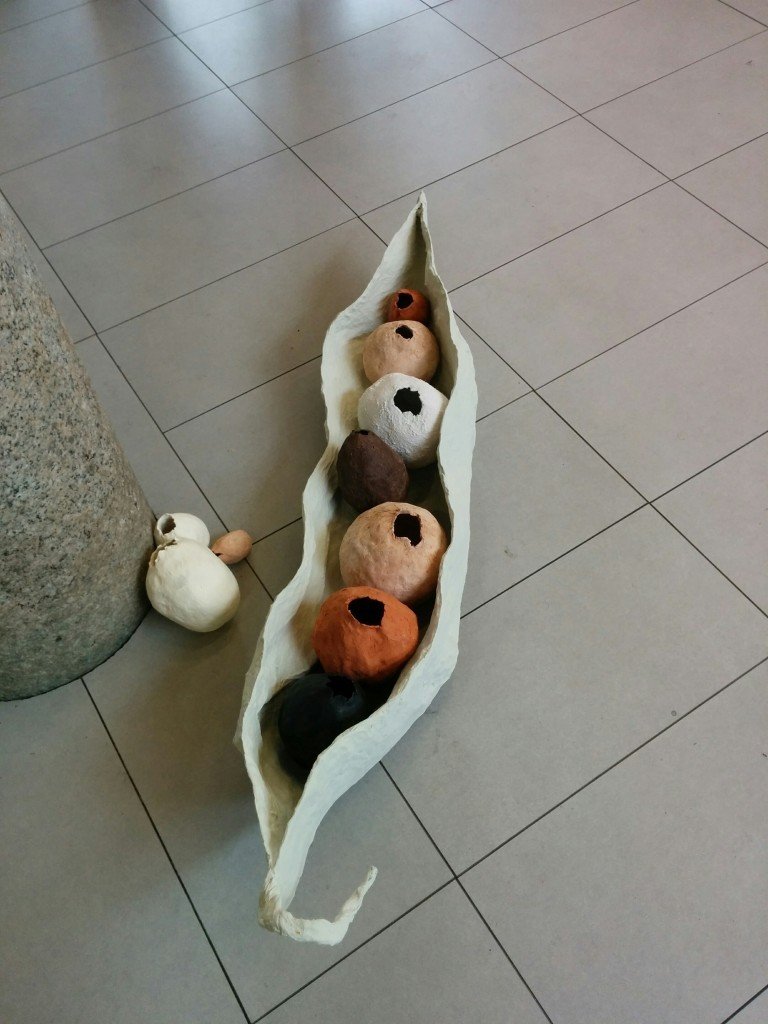 This is not quite a boat, but a city — the CLARICE Citta’ Gloriosa — “Glorious City” — by Ripepi. Maybe it represents the ideal destination? 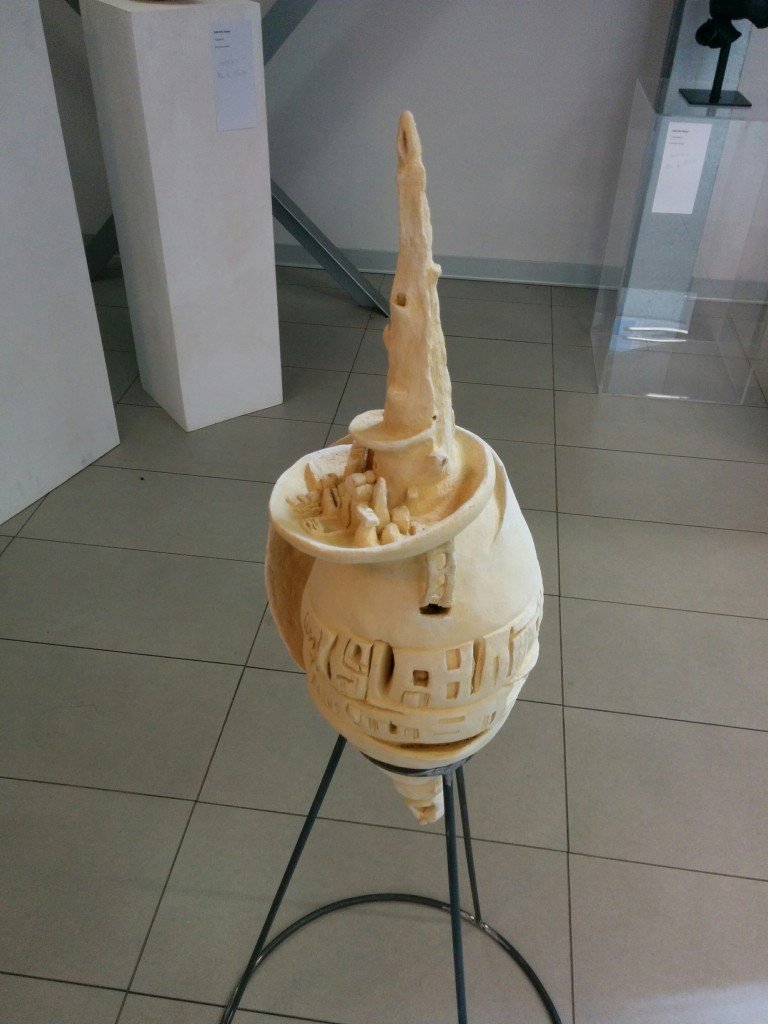 Terra sonnambula — “Sleepwalking earth” — also by Zocchetti. From the Earth, humanity was born, dreaming continually of carrying out voyages across the continents.” 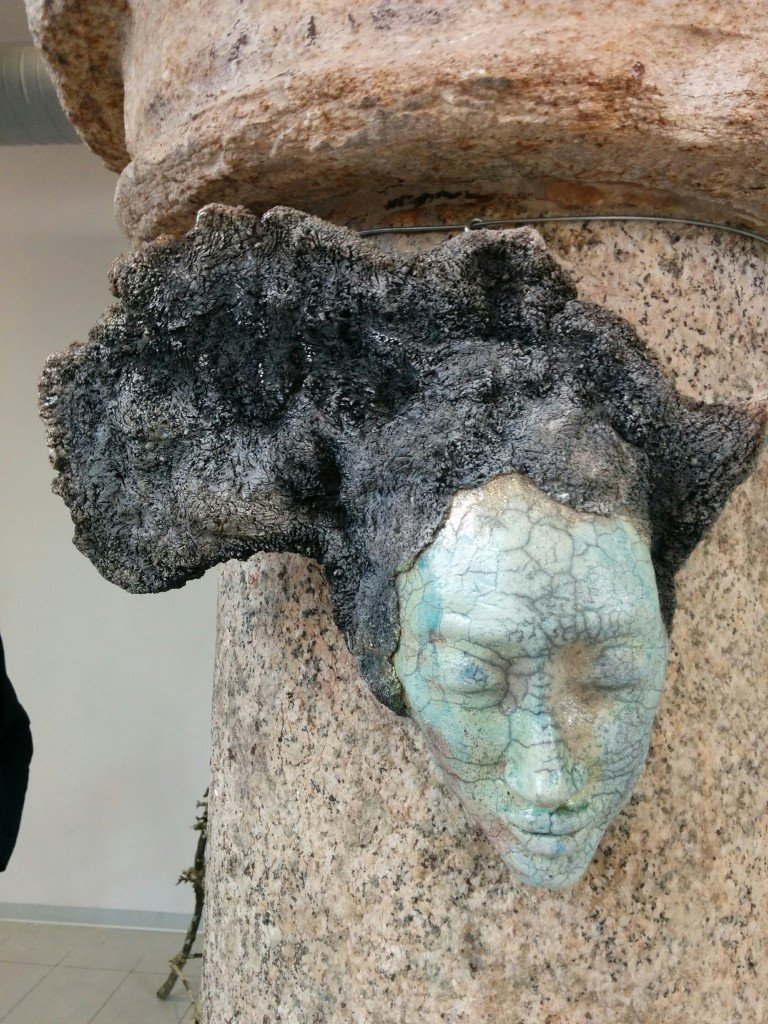 These pictures are just a sampling of the exhibition, which was called Il marchio di Ulisse. You can get more information about it via contacts here.

I, myself, have been a migrant to various countries — albeit not a disenfranchised one. This exhibition reminds me how much other people’s immigration shapes my life. My paternal grandfather, orphaned, took a boat from the Philippines to San Francisco in the 1920s to build a life from scratch. My paternal grandmother’s parents were immigrants to New York from Puglia (and, according to family lore, were originally from Milan), and my mother, born in the middle of World War II Germany, also sought out freedom in the US, from a past of destruction. My brother, a professor of education who specializes in immigrant literacy, does his research in neighborhoods in Philadelphia with waves of first-generation immigrants from places like Haiti, Vietnam, and West Africa. When I ride my bike to IMS from Lambrate each morning, I pass by recent immigrants to Italy, selling wares and busking on the sidewalk. Finally, many of my fantastic 46 fellow students are also immigrants. They have arrived in Milan from 23 different countries, ready to build a new life as a medical doctor, and, perhaps, later, to travel, to take care of others, who make their own walks throughout the world.