A Statistical Analysis of the 2016 IMAT Results 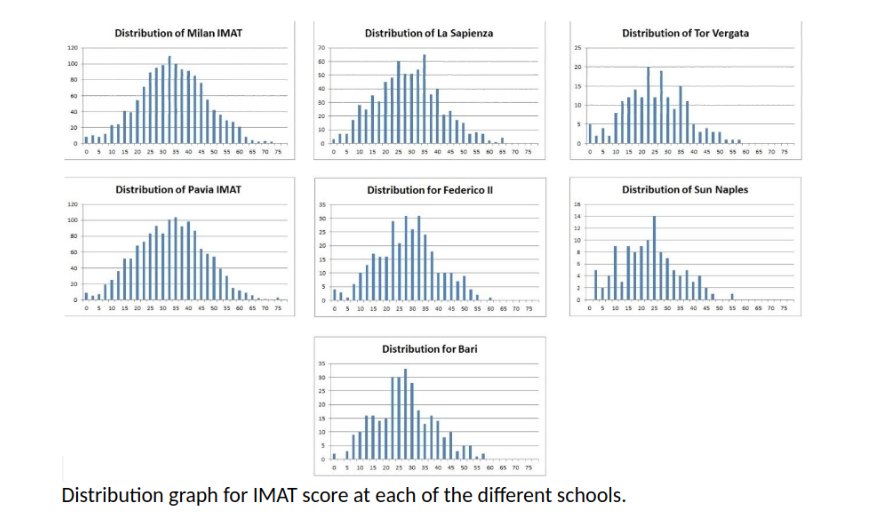 Results for first round are out. For those who are planning to take it again next year or undecided on which school to settle on, here is the review of the competition that you might be up against. Hope it will help you decide on the school you want to end up choosing as your first choice. It only shows the first school preference and may not reflect the cut off score needed to get into the school in later rounds. I am not qualified to speculate why some people choose one school over another. I am just making an observation from the data given and hopefully helping the future applicant in deciding their first choice school.

The distribution graph reflects EU and non-EU test takers’ scores combined but it should reflect the distribution for EU and non-EU separately fairly well. I checked Milan EU v. non -EU distribution, and their average and spread looks fairly identical. I am sure the same would be true for other schools once they are posted.

The top two schools in 2016, Milan and Pavia

Of all the IMAT test takers, more than 60% of the test takers make Pavia and Milan their first choice. Pavia and Milan have practically the same quality and quantity of applicants. This is reflected in the average and the spread of the scores, 32.67 and 31.88, for Milan and Pavia respectively. Although the number of applicants is virtually the same, there are significantly more seats in Pavia, thus making Milan the toughest and most popular International Medical School in 2016 — popular in the sense that even though Milan has half the number of seats, it still able to attract same number of applicants as Pavia. Just a heads up for those thinking of applying to Pavia: there are more seats for Pavia, but the competition is much higher than those of other schools as well.

30% of all test takers make these three schools as their first choice university. La Sapienza has more test takers than the other two combined. This would not be a surprise since La Sapienza has the most seats out of the three and is more talked about, at least on medschool. Surprisingly, the quality of applicants is virtually the same with the average of the IMAT score at 27.55, 26.76, and 25.91, at La Sapienza, Federico II and Bari respectively. So, the test takers among these groups might have their own preference in making their choice among these schools.

Less than 10% of the test takers make these two schools as their first choice. The average scores are also the lowest among all the schools, 23.84 and 21.97, for Tor Vergata and Sun respectively. The fewer number of test takers that make first choice for SUN is not surprising since most of the seats offered are for non-EU. This makes it the best choice to for non-EU to apply to, in order to get into a medical school, all else considered. Tor Vergata is on the outskirts of Rome, thus making it less ideal for European applicants, resulting in possibly the lower number of applicants.

Since you can only choose one school in your pre-registration, do some past exams and determine where your mark might be. (To be precise, you get three choices, but the 2nd and 3rd are rarely awarded.) Your mark at the time of the pre-registration deadline won’t change too much by the time you take your exam. If your marks are fairly high, I would suggest you go for Pavia or Milan. However, if you can barely make the passing mark, I would suggest that you either make SUN or Tor Vergata as your choice.

Jeff Liu took the IMAT in 2016, with IMS Milan as his first choice school.