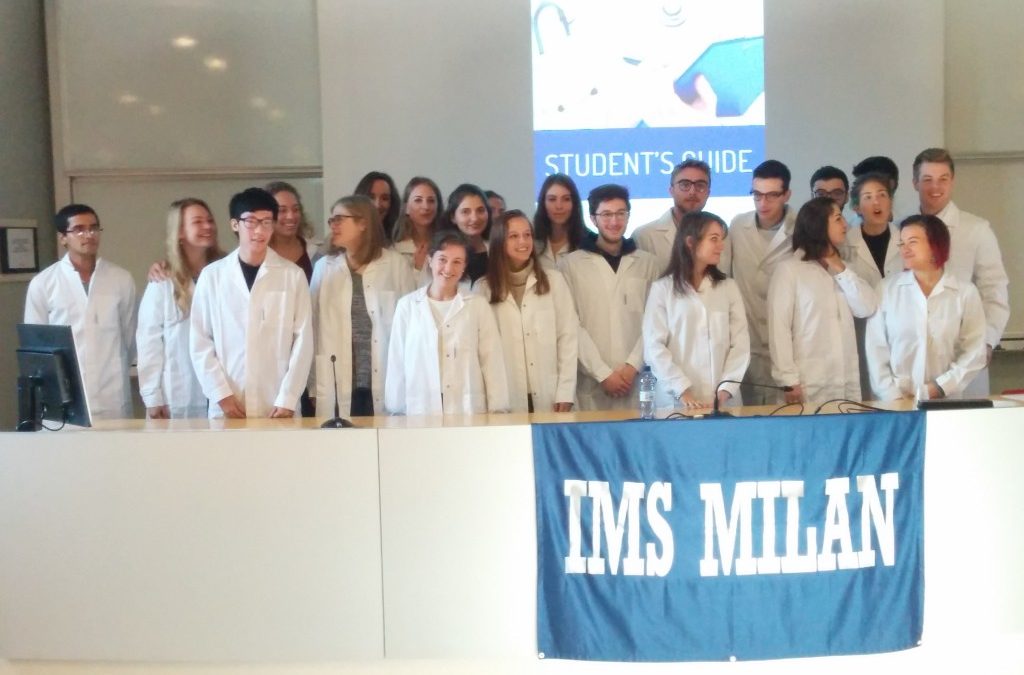 On Monday, IMS Milan celebrated Welcome and White Coat Day. New students watched various presentations about work and life at IMS, and students entering their third year — their clinical years — were given a white coat as is tradition in many medical schools around the world.

An upper year student, Xhorxhi Kaçi, gave a welcome speech to the incoming students. The speech was perhaps the most eloquent commentary I have yet heard on studying medicine in English in italy. Xhorxhi has given me permission to publish that speech on this blog.

Dear professors, distinct guests — I would like to say a few words on what being a medical student in this university is, to share my humble experience, although meaningless in terms of statistical evidence. So today, I’ll be mainly addressing my fellow colleagues.

Dear freshmen, welcome to Statale’s IMS! And congratulations on having made it this far. You probably were the best, the brightest, the most diligent students, since kindergarten, all the way through elementary, middle and high school. That’s all about to change. You probably spent hours and hours studying for the entrance exam, too. And it all came down to this: you’ve made it! You’ve fulfilled what thousands and thousands of seniors, and not only, aspire and compete for.

You are now MEDICAL STUDENTS.

But as Newton’s Third Law states, For every action, there is an equal and opposite reaction. So, by going to med school, you’ve all made a decision: the action. Today, I’ll be talking mainly about the reaction — the consequences that your action will bring. I’ll try sparing you the clichés on the med student who’s up studying at 3 in the morning and bla bla bla, or that of the med student that curiously enough, acquires a feature that no other organism has in nature, that of transforming caffeine into productivity.

The first myth to fall — yeah, you guessed it — will be House MD. The way they perform CPR, with their elbow articulation flexed, is of very little help to the poor person lying on the ground there, half dead. But that’s just one example of how distorted medicine is on TV. Give it a few months and you’ll become literally the worst person to watch medical shows with.

During your studies, you’ll learn the true shape of a human heart. You’ll learn that, what throughout history has been, I dare say, the strongest driving force, love, is a mere chemical reaction. You’ll get to know your body and how it works, the existence of structures you’d never heard of that despite that, are inside you, and often, vital to life! You’ll learn that you’re only 10% human and 90% bacteria. No need to panic, still just an estimation! But still, shocking, right?

You’ll learn why crackling your fingers makes that noise, and a series of very very difficult but very very cool names, that you’ll use to impress those who aren’t lucky enough to have this calling in life.

During your university career, you’ll have quite a few satisfactions: the first practical lesson of human anatomy in the lab (and I mean #selfie_with_the_skull), the first day wearing your white coat (and I mean #Greysanatomy, #futuredoctor) and so on.

People often see physicians as some kind of superhero. But if there’s one thing superheroes have taught us, is that with great power,  there comes great responsibility!

Mark my words on this: it doesn’t matter if you’ve only been a med student for even just one day, at every family dinner, you’ll have to hear about every single disease your relatives have, every single drug they take, and most importantly, your opinion on it! Careful now, this is the phase where we — I’m still on that phase, I know nothing and I’m fully aware of it — might do more damage than good.

But that is merely the playful part of your education. You’ll have two years of preclinical and then, four years of clinics. And that, my friends, is no laughing matter. Only once you’ve been in the ward will you truly grasp the essence of being a medical student.

The moment you’ll look in to the eyes of your first patient will be the swerving point in your career. You’ll fathom that you’re not studying to pass the exam. You’re studying for the day that between your diseased patient and death. There will be only your knowledge.

But no matter how many books you literally devour or memorise,  there will always be something that you won’t remember or that you will have missed. Start getting used to the idea, but make an incentive out of it! An incentive to study more. ‘Cause that paragraph you skipped and weren’t asked at the exam? That knowledge might have made a patient’s life a little easier. And we’ll have to work in narrow spaces, where “a little better” makes all the difference in the world.

You see, my friends, you have taken upon you a privilege that is, at the very same time, a curse. The curse of knowing one could’ve done more. And I’m not talking about grades. No, I’m talking about something way more important! I’m talking about life, life quality,  patient’s recovery.

Now, I don’t remember much from my ‘welcome day’ speech, but I’ll wind up giving you the same word of advice i was given three years ago, when i was, just like you today, a freshman.