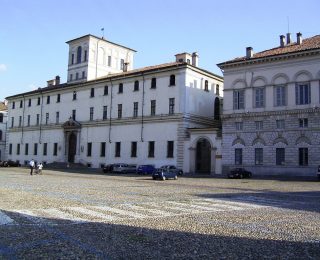 So, you’ve passed the IMAT! The initial buzz of excitement and bon voyage parties have come and gone, and maybe you are starting to feel a little nervous about what comes next. What is Pavia like? Will I like it? And very importantly, where will I live?

So, you sit down and do some research (thanks, medschool.it) and read all about student accommodation in Pavia.

Some of what you’ll read here is specific to Pavia. But other parts are true for all Italian cities. So if you’re studying medicine in Italy, read on!

By now, you’ve learned that most students either rent an apartment or live in one of Pavia’s student dorms, a collegio. Officially, you know all there is to know, but what is the real day to day life like? What are the pros and cons of each choice?

As someone who has done both, I’m here to tell you everything there is to know about your new home in Pavia!

My first year in Pavia, I decided to stay in a collegio for two reasons. First, as something all new students discover real soon, finding an apartment in Pavia can be hard! Not only are you arriving later than other students — IMAT results usually come out about two weeks before classes — but, most likely, you don’t speak Italian either! Your options will be somewhat limited and making yourself understood can be a challenge. On top of all the other bureaucratic work that comes with moving abroad, I did not want this extra worry. And second, like many, I wanted the experience of living in a university dorm. What could go wrong?

One thing you have to know is that there are many different structures among collegi. In some, you’ll have the option of a private room or a roommate. Others might offer you your own bathroom, or you’ll share it with some of the other students. Most will have a kitchen to be shared amongst the students that live on that floor. So, even though you might have some privacy, most of your living situation will involve sharing a space with other people.

While this seems somewhat obvious, if you’ve never left home or never had roommates, the first few months can definitely be a bit of a learning curve! You will, for sure, learn a thing or two about yourself, but will also be much more conscious of and sensitive to those around you. (Great qualities to hone as future doctors, am I right?)

In my case, I had a roommate. There’s a good and a bad side to this and, while much of this interpretation is based on my own point of view and personality, I’ll try and make it as approachable to everyone as I can.

By the way, pretty much every Italian university town has collegi. In some cities they are more prominent than others. But whether you are in Pavia, Milan, Rome, Naples, or wherever… you can find a collegio.

Living in a collegio – pros and cons

First, the obvious language barrier. While many of us from foreign countries have had English drilled into us from a very young age, that isn’t necessarily the case for some Italian students. I was surprised to learn that my new roommate spoke no English and, with my very limited Italian, this led us to a communication standstill. I personally imagined my roommate and me to be like Joey and Chandler, so the initial surprise was a bit of disappointment.

I also can’t fail to state that sharing a room means living in very close quarters with virtually a stranger, and it is unavoidable that some routine, everyday problems come up. Our difficulty in addressing those issues sometimes made our living experience tougher than it actually had to be. (Rule number one of roommates: communication is key! If something is bothering you, speak up!)

Our problems aside, my roommate was a very nice girl, and we both tried our best to get to know each other through many late-night Google translator-aided conversations. What was the good part of all of this? My level of Italian went up dramatically during the time we lived together.

Many new students may not realize how easy it is to forget to learn Italian. Seems paradoxical… after all, you’re living in Italy, right? Nope! Most people in your new class will be from outside of Italy. Most likely, they will be the first potential friend group you’ll meet. You all will go to class in English. You’ll hang out mostly with English-speaking people during your first months. Sure, you’ll order a cappuccino in Italian, but fluency and confidence in speaking only come with a lot of practice.

Another thing to consider is sociability. Whether or not you’re a bona fide wallflower, moving to a new country alone is scary! You might be homesick, or even lonely, at the beginning (which is totally normal, everyone — no shame in it).

Living in a collegio means being surrounded by people that are in a very similar situation to yours. For some time, my roommate was like a built-in companion. Even if we were just studying or dining together, it was nice to see someone at the end of the day and have her tell me how her classes went.

Let’s get practical now for a bit. If the roommate gods are to smile upon you and you’re allowed a choice of whom you live with, pick someone who studies something similar to you. While doing so might seem like you’re missing a chance to get to know other interesting things, it really helps to have someone who keeps a schedule close to yours.

One of the biggest issues I had with my roommate was just timing. While I had classes early in the morning and went to bed at a reasonable hour, she had most classes in the afternoon and did most of her studying at night. Despite being as ninja as possible, she’d wake me up when she got in late and I would wake her up when I got up in the morning. Was it the end of the world? Definitely not. Was it uncomfortable? Sure.

Also, you must remember that you are in a dorm context! That doesn’t mean the crazy environment we see in American college movies… but do expect some shenanigans and the occasional noisy neighbor.

The craziest thing that ever happened to me: someone set off the smoke alarm in the middle of the night (accident, prank, who knows?) and a bunch of us left the building in pajamas thinking there was an actual fire. There wasn’t, but I learned a lot of new Italian curse words that day.

For the sake of completeness, here’s a few quick facts that will help you survive in a collegio:

Now, to the fun stuff!

Extracurricular activities, like lectures or talks, take place all the time… just downstairs from you! Almost all of the dorms will have some sort of sports team, a great way to get to know your neighbors. Competitions take place between other dorms. Each of them will have their colors, and most people grow very fond of their own team!

Which brings us to the annual Treasure Hunt! This huge event happens all around Pavia, with all dorms involved. I couldn’t participate in the year I lived there, because I had an exam that week (welcome to med school life), but it is known to be a day of fun and healthy rivalry!

And, last but not least, the parties. Each collegio will have one big party in the spring, usually with a theme. They are a great way to celebrate the end of the winter and welcome the sun!

Convinced that a collegio has you written all over it? Keep reading and I’ll explain how to apply to a collegio in your first year. Not sure if this kind of student accommodation is right for you? Our next post will be about apartments in Pavia!

The knowhow of applying

Dorms in Pavia are run by EdiSu.

(http://www.edisu.pv.it/index.php?page=accesso-ai-collegi-e-residenze) There are exceptions, such as the merit-based dorms, but they won’t be accessible to you in your first year, unless you have an Italian high school diploma. So, how do you get the process started?

But I didn’t. I moved to an apartment. Stay tuned, because my next post will be about apartment living in Italy.