When comparing Italy to other European countries that offer medical courses in English, it becomes clear that the tuition fees in the public Italian medical schools (400-4000€/year) are nowhere near the 9000+ € that one would pay in eastern European schools  (Hungary, Slovakia, etc.) — or even more, in UK or US medical schools. Italian universities get some degree of freedom in establishing their fees, but as a rule they are kept the same for European, Italian and non-European students. These prices are possible because the public universities are partially government funded. That makes Italy one of, if not the brightest example of, financially accessible higher medical education for all.

The other important components are living expenses, which are mainly housing, food, transportation, and possibly books. The prices can range quite a bit among the cities, but one can expect to pay 500-1200€ per month, depending city’s size and location. As a rule of thumb, the bigger the city, the more expensive it usually is. Northern cities tend to be more expensive than southern, but the northern ones also more developed in terms of roads, airports, and various services. Be aware that expenses in the first year can be up to twice as high, because you will need to pay security deposits for rent (usually 3 months rent), new stuff for your home, and finding cheap groceries. You can browse among the various universities to get a better idea, or compare them side by side. 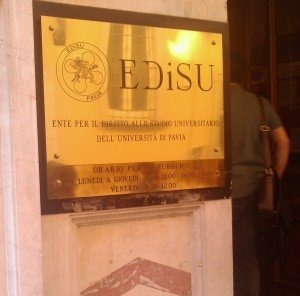 Practical ways to finance your medical studies in Italy

Financing your studies in Italy

Students with average or below-average economic backgrounds can find a variety of options to finance their studies. One option I never saw in my six years in Italy was someone taking a student loan, probably because these options are sufficient enough.

Scholarships The easiest first step is to apply for a scholarship. In Italy, scholarships are government funded and centrally provided via offices which are spread all over the country, and whose purpose is to ensure that university study is universally accessible. These offices have various names in different regions; in Pavia, it is called EDiSU; in Milan, DSU, and so forth. There are thousands of scholarships allocated to each university, and these are given to students based on their family income and academic achievements. Be aware that having a degree in any field, or repeating a study year, will automatically disqualify you from getting a scholarship. The scholarship can be up to 4800 euros per year per student, and include free meals in the school cafeteria, cover dormitory expenses and tuition fees, and are possibly paid in cash.

Work Non-European students are allowed to work in Italy with their student visa and residency permit. These permits are officially limited to half-time jobs (up to 20 hours/week). Part-time jobs are generally available in bars, hotels, and cafes, but one must consider that they are hard to find during the first years, particularly if you do not speak Italian. Some cities — usually the southern and smaller ones — tend to have more problems with unemployment, so this is also something to check when you choose which schools to apply to. The universities themselves often offer mini-jobs for students. Those can include tutoring, library work, labs, university offices, etc., and usually require several hours a week. You will need to apply to tutorati via the university offices. To compete for these jobs, one needs to have good marks and show some competitive advantage in one’s CV.

Loans The universities and associated bodies also offer student loans, which are usually of few thousand euros, and are more suited for getting through a rough period, rather than financing all six years of studies. Friendly advice: make sure you have enough savings or financial support from home for at least the first year or two. The first years are full of expenses, and although all the options above are helpful, during your first years there are enough things to take care of. Not having to think about money for a while helps to get you started off right.

Alex Ochakovski (Pavia)
Founder
Alex is a graduate of the Harvey Medical Program at University of Pavia and is the founder of MEDschool.it. He is a Resident in Ophthalmology and a Researcher in Ophthalmic Gene Therapy in Germany.
Latest posts by Alex Ochakovski (Pavia) (see all)
We use cookies on our website to give you the best experience and help us learn what content is most read and relevant to our readers. By clicking “Accept All”, you consent to the use of all the cookies.
ACCEPT ALLSettings
Manage consent