IMAT Online Course: How do you pass the IMAT?

How do you succeed on the IMAT?

Passing the IMAT test is the biggest hurdle you will need to overcome, to become a medical student in one of the top English-taught, international medical schools in Italy. In 2019, as many as ten-thousand people worldwide registered for the IMAT test, so every point — or even a fraction of a point(!) — you get on the IMAT could make the difference between passing or failing it. This is why the quality of your preparation is a crucial component of your success.

In this article, I will summarise the best practices and tips for passing the IMAT, based on my years-long experience with the test, which includes preparing others for it, as well as officially supervising the IMAT exam at a test centre.

What is the IMAT?

The IMAT (International Medical Admission Test) is the official admission test used to select among the candidates who want to study medicine in English in Italy. The IMAT for public universities is held once a year (usually in September) in paper form, in numerous test-centres, in most major cities around the world. The IMAT will examine your knowledge in several scientific topics such as biology, chemistry, physics, and maths, as well as problem solving, critical thinking and general knowledge.

The exam takes only 100 minutes, in which you are supposed to answer 90 multiple choice questions with five possible answers, of which only 1 is correct. The test is scored so that you gain 1.5 points for a correct answer, get a penalty (negative) of -0.4 points for each wrong answer, and 0 points for each unanswered question.

What makes the IMAT test difficult? 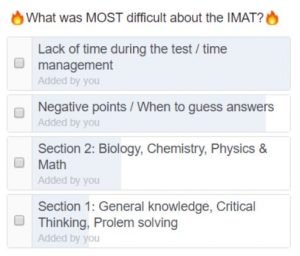 What, however, makes the IMAT test difficult? Which parts of the test tend to get more difficult over the years?

There are three main things that most IMAT takers find difficult: (1) time management, (2) guessing answers (and getting penalty points), and (3) solving the actual questions. Biology is the part that gets more and more difficult every year. In recent years, general knowledge questions have also become more numerous.

We will see, in more detail, what those three factors mean exactly. First, though, let me introduce you to IMATschool, a project initiated by MEDschool.it, to offer high-value preparation for IMAT, no matter where you are, and for every budget.

IMATschool is an interactive IMAT preparation course for the digital age, and is built to be as easy-to-use, accessible online worldwide, effective, and cost-efficient as possible. IMATschool combines methods proven by research with techniques to prepare you for the IMAT in the fastest, most engaging, and effective way possible.

The course includes tons of video lessons, a question bank of 1000+ IMAT practice questions, and live-streamed group lessons with Cambridge and Oxford IMAT teachers that will answer your questions in real-time, and take you from where you are today to the becoming the best version of yourself for the IMAT test.

IMATschool has received stellar reviews, with more than 96% of IMAT Live Course-takers saying that they would definitely recommend IMATschool to a friend.
Try IMATschool and see why!

How do you prepare for the IMAT? 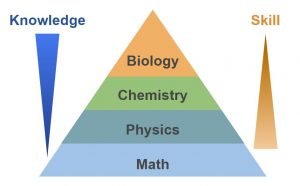 How do most people prepare? A common mistake that a lot of people make, especially those who prepare with books alone, is to spend most of their time reviewing high-school material. This approach is wrong on several levels, which I will explain one-by-one.

If you analyse the IMAT, only a minority of questions are purely knowledge-based. These include primarily the biology section. However, IMAT biology is much more difficult than your high-school/A-level books, and this section becomes more and more difficult every year of the IMAT. So if you want to prepare well for biology, you will need to go beyond high-school books, but not to waste time on overly advanced material as well. To get this fine balance, you will need a good strategy to go over just what is relevant for you to the test.

Moreover, you may learn all the biology you want by heart, but the trick is to be able to apply this knowledge to solve IMAT-style questions under time-pressure. This is why IMAT-question practice should be an integral part of your preparation strategy, and not just something you do at the end of your preparation period.

The vast majority of IMAT questions are skill-and-technique questions. What do I mean by that? Knowing how to extract main conclusions from a text in critical thinking, or analysing tables and graphs in problem-solving questions, are skills that can be learned and improved easily with the right material, approach, and practice.

That’s why we have dedicated a whole video course to those IMAT topics at IMATschool. The same can be said about chemistry, physics and math. There is much more than just knowing those materials; you have to know the techniques, polish your skills, and practice as much as you can.

So preparation for every section of the IMAT requires a tailored approach, both because of the different knowledge-to-skill ratio that every subject requires, as well as your personal level of previous knowledge. What works well for preparing for biology will not work as well for the physics or problem-solving sections. So don’t waste your time and money on books and Wikipedia-style IMAT courses that are clogging your head with theoretical stuff while not showing you hands-on how to solve IMAT questions quickly and efficiently.

What do students say about IMATschool?